Sportsmen are critically important to wildlife and landscape preservation Each year, the funds we spend help manage game populations and help  preserve ecological sustainability. Organizations like us, made posssible through donations by the community, take it a step further. We help sponsor projects that help Chukar and other upland game bird populations, but these projects help a whole suite of other native wildlife species too.

See below for more information on conservation projects we are involved in:

WHAT IS A GUZZLER? 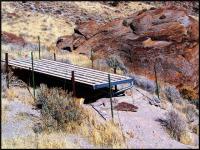 A guzzler is simply a device that holds rain water for utilization by wildlife. A guzzler consists of a large water gathering platform, usually corrugated steel roofing, which is placed at a slope and used to funnel the water into a holding tank. These guzzlers are particularly useful in desert climates where surface water is scarce.

Guzzlers have been known to host dozens of species of native birds and mammals, as well as reptiles and amphibians. They can be essential to desert survival, particularly in years of drought and famine.

GUIDELINES FOR EFFECTIVE PLACEMENT AND USE OF WILDLIFE WATER DEVELOPMENTS: IDENTIFYING DIFFERENCES BY SPECIES, SEX, AND REPRODUCTIVE STATUS

Springs and wildlife water developments located in the Great Basin and Mojave Deserts.

This report is a summary of research activities conducted between July 2009 and December 2009 on the wildlife water development project. Research activities and information are outlined below under subheadings that generally track the proposal objectives. The initial six months of this first year have been very successful with significant progress made in several areas. We were able to identify a graduate student (Andrew Shields), hire and train technicians, and begin data collection for this project. We sampled 7 clusters (each cluster with between 4 and 5 water sources) for a minimum sampling period of 2 weeks. We successfully worked out the logistics of this sampling scheme and are confident the data produced will help inform management of wildlife. Pictures continue to confirm our hypothesis that mule deer avoid water sources with small-perimeter fencing and we are currently working to determine minimum perimeter size needed for mule deer use.

We expect that ungulates will preferentially use water sources based on their predator avoidance mechanisms and that we will find differences between species, sexes, and reproductive status (young present or not). To test these ideas and provide guidelines on optimal placement of water developments, we are taking detailed habitat measurements at each site. These detailed measurements along with remotely sensed information will allow us to determine preferences that directly influence placement and management of wildlife water developments.

An additional objective of the current study is to determine the influences of free water on Gambel’s quail. During this initial year, we located study sites and were able to use remote cameras to determine the temporal window of water source use by Gambel’s quail. An understanding of a species water-use period is an important first step that is necessary for continued work. Gambel’s quail were documented using water during April—November with peak use during the summer months of June, July, August, and September. This window is larger than that we observed for chukars (May—October) and will provide a good number of months within which to assess quail response. The first 6 months have been a resounding success. Over the next 6 months we will be busy sifting through the nearly 100,000 photographs collected during the first six months along with continued monitoring of water sources. We will have a more detailed and substantive report available at the end of June.

Objective 1: Describe habitat characteristics associated with use and non-use of water developments by target species.

We began sampling water sources in April of 2009. This sampling has continued through the present. A large amount of preparatory work has been completed including development of a GIS layer containing locations of known water developments and natural springs. In addition,

we were able to refine the sampling protocol. In rough sketch, we use the developed list of water sources and then randomly sample a couple of sites from that list for a given sampling period. Once a water source is randomly selected, we identify all known water sources within a biologically reasonable distance for the species of interest. We are using 10.3 km as our reasonable distance because it corresponds to the average summer home-range diameter of elk (Cervus elaphus)—one of the more vagile ungulates (Irwin and Peek 1983, Edge et al. 1985, Anderson et al. 2005). This value is also associated with the expected maximum distance female Townsend’s big-eared bats forage from day roosts (Fellers and Pierson 2002) and thus provides a biologically meaningful maximum scale at which to evaluate use. Analysis for less vagile species (e.g. mule deer, coyotes, kit fox, Gambel’s quail, etc.) can then be scaled down accordingly.

Once a randomly chosen water source is selected and all known sources within 10.3 km identified, cameras are deployed on these sites, photo or bat detection (encounter) rates documented, and inference made about selection between watering sites. We leave cameras in place for a minimum of two weeks at which point the process is repeated. We sample with replacement so that selected water sources are put back into the pool from which random sampling occurs. Habitat measurements taken at each sampled water source include percent shrub cover, percent tree cover, distance to cougar cover, slope, obscurity measures, distance to steep rocky escape terrain, presence or absence of fencing, fencing design and dimensions, water surface area and dimensions, etc.

In the lab, we will then use the field-based measurements in conjunction with remote sensing, GIS and geostatistical analyses to model photo counts and bat detections as a function of surrounding habitat characteristics, water source design, pool size and dimensions, etc. Likely

analytical tools include the relatively new suite of zero-inflated models useful for count data, appropriate classification techniques (e.g. logistic regression or random forest), and decision-based analytical tools such as rule fit. GIS-based data layers to be incorporated include topography (aspect, elevation, ruggedness, slope) and vegetative cover. Sampling in a clustered design allows us to control for important influences of temperature, precipitation, and animal density because we make comparisons of use among water sources in an individual cluster (same area, same time frame, similar environmental conditions).

During the period of interest, we sampled 7 clusters (4-5 water sources each) for a total of 30 water sources. This sample included 21 guzzlers and 9 springs. With this sample of seven clusters and a few clusters from earlier sampling, we have the beginnings of a decent sample size. In addition, we also maintained cameras on all water sources (13 guzzlers and 4 springs) on one mountain range from July to mid September to better understand mule deer timing and frequency of water source use. Almost 100,000 pictures were taken at water sources this year. Photographed wildlife included carnivores, ungulates, bats, birds, and others (see Figure 1 for example photos).

Although we are currently still sorting and analyzing photographic data, several noteworthy patterns have emerged. First, data continue to support the idea that small-perimeter fencing limits mule deer use of water sources. Many guzzlers are fenced and will need to remain so in order to limit problems associated with feral horse and livestock use. It is important to determine the dimensions, style, and design of fencing suitable for mule deer. We were able to show high mule deer use on a water source with a recently installed gated fence. During a 3 day period, the camera at the guzzler with the open gate (Figure 2) took approximately 110 pictures of mule deer, whereas the camera at the other guzzler with no gate (Figure 3) took only 3 pictures of deer. We will continue to work on this issue, but it appears that one potential solution in some areas may simply be a gate that is opened or closed seasonally dependent on timing of potential conflicts.

Figure 2. Photograph of guzzler with small perimeter fencing and open gate. Over a 3 day period approximately 110 mule deer were photographed at this guzzler.

Figure 3. Guzzler enclosed by small-perimeter fence with no gate. Over the same 3 day period only 3 photographs of mule deer were taken at this guzzler.

Objective 2: Determine differences in water-site selection for target species between males, females, and females with young of the year.

We did see some sexual segregation in several of the sampling locations and noticed that females and females with young tend to discriminate more than males in choosing which water source to use. This result aligns nicely with commonly held views about sexual segregation (particularly among ungulates) in habitat selection. We are excited to increase the sample size this next year and begin to analyze these data.

This initial year has been quite successful in identifying sites appropriate for future research as well as determination of the temporal window within which Gambel’s quail use free water. An understanding of this species water-use period is an important first step necessary for continued work. Gambel’s quail were documented using water during April—November with peak use during the summer months of June, July, August, and September. This window is larger than that we observed for chukars (May—October) and will provide a good number of months within which to assess quail response over the next few years.

We are also working to identify habitat features associated with use of water sources by quail. It appears that shrub cover is positively associated with use. For chukars, we found that 10-11% shrub-canopy cover surrounding water sources increased the probability of use. We are currently working on identification of any similar thresholds for quail—particularly females with young of the year (Figure 4).

Objective 4: Transport the information gained in this and the prior guzzler study to an easily accessible format (website) readily available to agency personnel.

Completion of this objective will occur following several additional years of sampling. We have purchased the domain name “www.waterandwildlife.org” which will serve as the website where this information is eventually stored.

The first 6 months have been a resounding success. Over the next 6 months we will be busy sifting through the nearly 100,000 photographs collected during the first six months along with continued monitoring of water sources. We will have a more detailed and substantive report available at the end of June in association with completion of this first full year’s research. We look forward to additional developments over the next few years.